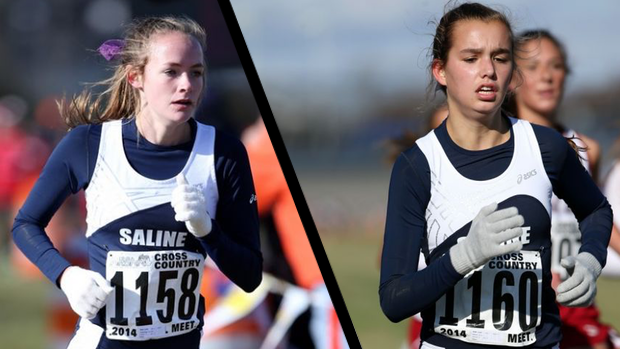 We continue our scouting report series with powerhouse, Saline. Saline has been coached by Coach Mike Smith since 1977. During his tenure his team has won 14 straight regional titles. In 2014 they finished fifth in Division 1. They return that entire varsity squad. We talked with Coach Smith about this years squads as well as what he has learned from his time at Saline.

Coming into the season with your entire varsity squad returning from last year, what are your goals for this season?

Your team had 139 runners last year - how do you get such a large team out? Do you think this year’s team will be even bigger than last year?

We're anticipating around the same numbers as last year. We were concerned a few years ago when Saline went to pay-to-play that our numbers would be affected, but that has not been the case. Our team numbers are a result of one thing: we work to make it happen. We have around 1800 students in our school so we feel like we SHOULD have a large team. Some of our team goals include having at least 25 freshmen on the team each year and that at least one out of every 10 girls in the school is on the cross country team. Right now we're at about one out of eight. We are also very fortunate to have great participation on the boys' XC team and in both boys' and girls' track. Running is big in Saline and the Saline community, and that makes our job that much easier in the fall to attract athletes to our program.

How to handle such a large team?

Sometimes the numbers can seem a little overwhelming (think "road race" every day for practice.....), but we're happy to deal with that "problem." We are very fortunate to have 10 coaches (many who are volunteers) on our staff. Otherwise there is no way we could carry as many team members as we do. Not every coach is there every day so on an average day we may have 6-7 coaches to work with the girls. We work hard to keep things organized, and we utilize different training groups (normally 3) that are based on experience and ability. We also break the training groups down into sub-groups, and each sub-group has group leaders (seniors) who are in charge of that group. With the numbers we have, we rely a great deal on our seniors (35 this year) and our captains (7 this year) to help run the team.

What would you say is the strength of the current squad?

The strengths of this year's team are experience, leadership, and the willingness to train 12 months a year. We have 21 of our top 25 runners returning from last year, so we want to rely on that experience to reach our 2015 goals. We also strive to create a great deal of competition within our team. We tell our girls this: "All you have to do to run on the varsity is beat 120 of your teammates." We WANT that competition for those top 7 spots. The more competition there is the better we will be.

What does summer training look like for the Saline girl’s team?

Beginning the day after school is out the girls meet for conditioning four days a week at 9:00 a.m. (Monday-Thursday), and then on Friday many of them meet at the Ann Arbor Running Company (a new local running store) where they host training runs each Friday morning. The training emphasis during the summer is on strength, endurance, and consistency. A typical week would include hills, distance, tempo, and tempo intervals.

Which meets will the Saline girls focus on this season?

We are fortunate not to run dual meets in our conference, so that allows us to focus on the 3 conference Jamboree meets that our run during the course of the season. Also we really look forward to going to MSU and Portage - meets that duplicate in many ways the State Meet. Even without dual meets we try not to over race, so in some cases we may run hard tempo in a race situation rather than going all out.

What are some staple workouts that your team does throughout the year?

Two of our standard workouts are Harvard Hills and decreasing pace tempo runs. Harvard Hills are famous (or infamous) in the Ann Arbor area, It is a very steep hill (about 250 meters long) on Harvard Street near the UM campus. We drive to UM's track, warm up for 2 miles to Harvard, do the hill workout, and then do the 2 miles back to the track. It's a good day's work! Decreasing tempo runs would be, for example, doing four miles, and each mile drops in pace until you're at race pace or close to it for the final mile.

Do you foresee having any impact freshman this year?

As mentioned above, we anticipate having at least 25 freshmen on the team, and we feel that 3 or 4 of them could challenge for a top 10 spot on the team. Our Middle School coaches do a terrific job, and they send us great athletes every year.

You guys have won 14 straight regional titles - what’s the key to sustaining such a high standard for as long as Saline has?

I think a big part of maintaining tradition and excellence is having the girls BELIEVE in that tradition. If they have won X number of Regional championships, then they know they are expected to carry on that tradition. We may have lost a few seniors from the previous year's team, but they know now it is THEIR turn. Those departed seniors - those former teammates - are now counting on them to do what they are supposed to do. And that philosophy carries on into their overall training. Our top girls know that they are expected to train 12 months a year. They don't want to let a tradition of success die. That is strong motivation.

You’ve been coaching since 1977, what have been some of your favorite memories over the years?

Some favorite memories would include: the first time (early 1980's) we ever qualified a Saline girls' team to the State Meet, coaching the girls' and boys' team as one program until the team became too large and we had to split into two programs, when we finally reached a point when we had 100 girls on the team, coaching with many talented and loyal assistants over the years, seeing a big smile on a runner's face who just broke 35:00 for the first time, what Hudson Mills looks and feels like in late October when it's time for Jamboree III, being in the middle of a killer workout and knowing the girls love it just as much as I do, watching student-athletes evolve from quiet and unsure freshmen to confident and mature seniors, the view from the podium at MIS.

What have you learned during your time coaching?

-High school athletes are ready and willing to work if given the opportunity and the direction.

-Competing is important and so is winning - and so is having fun along the way.

-Female athletes will work just as hard - if not harder - than their male counterparts.

-Don't take yourself too seriously.

-Take care of those who help and support your program - secretaries, bus drivers, support staff.

-Being a coach is being a teacher just in a different setting.

-The 100th girl on the team cares just as much about her performance as the 1st girl.

-There is no end to how supportive Cross Country parents can be.

-If things don't turn out the way you wanted them to, make some changes and do it better the next time.