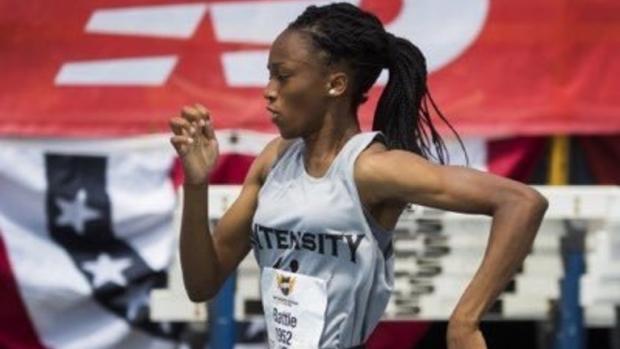 Anavia Battle can feel the tension in her hands and arms and knees and feet when she steps to the line in big meets.

Sometimes it's impossible for the Wayne Memorial senior, currently US #2 in the indoor 200m and US #5 in the 60m, to escape those pre-race nerves. The air. The track. The crowd. She can feel it all, no matter the experience or confidence in the situation.

Even after the thousandth race, it still feels the same.

So it's about then when she begins to recite a quote her 79-year-old grandfather, Clyde Battle, a former track and field standout, told her years ago.

Don't let the butterflies get you down …use them to let you float.

"I block everything out," says Battle, who was part of a 5-signee class with the University of Nebraska in November. "Complete silence in my head. All I can hear is 'Runner's on your mark! Set!' And the gun. That's all I can think about."

Go back to Dec. 3 for Battle's most recent breakthrough performance. It was there on Grand Valley State University's 300-meter indoor track where she hit that national time of 24.19 seconds during a Michigan Indoor Track Series meet.

It signaled yet another personal record on the track for the senior, who has personal records in the 200m of 23.92 and in the 100m of 11.90. She's just hundredths of a second away, however, from the mark that still escapes her: the state record in the 200.

"That's the time she really wants," said Jamal Johnson, who helps coaches Battle in both outdoor track at Wayne Memorial, where heads the boys program, and with Intensity Track Club, where he works with the female sprinter first hand.

Battle wants to break both.

And she's preparing for yet another blip on the national radar on Jan. 14 at Grand Valley State track for a chance at the open 200m. Last weekend she ran 7.64 seconds in the 60m and doubled with a 59.98 effort in the 400m. 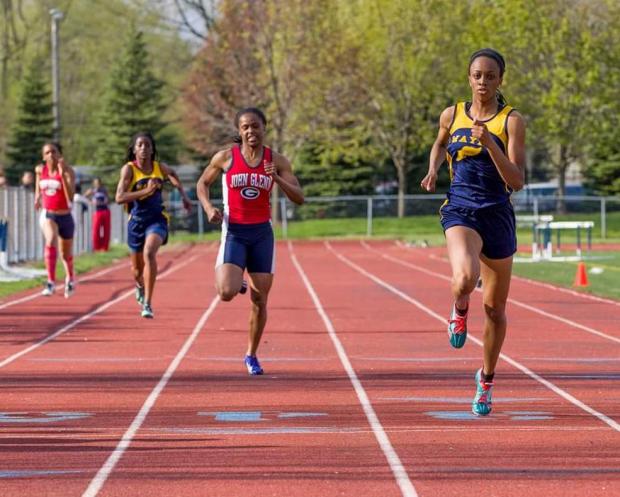 The Michigan record is within grasp for Battle, she feels, if only because she feels confident every time she steps to the line.

Surprisingly enough, though, Battle is considering skipping her high school's state meet, her final in a Wayne Memorial uniform, in favor of something else this year. That seminal moment for all high schoolers: graduation.

"I've been an (advanced placement) student most of my life," said Battle, who is planning to study microbiology at Nebraska and enter on a pre-med track. "You only graduate form high school once. You might graduate from college three or four times. It won't be the same. You're with friends from elementary school that you grew up with and you see how everyone grew up and achieved something so great."

Of course, by then Battle hopes her plans have already shaken out: shattering the Michigan outdoor record in the 200 so much that it's almost impossible to break.

"I don't want people to reach me so easy," she said. "I want them to work to get it. I want to shatter it, to blow it out the water."

Johnson says the real mark of Battle's season is whether she can produce an All-American nod at New Balance Nationals Indoor and Outdoor.

"Getting on the All-American stage is where she wants to be," Johnson said.

A season ago, she was 15th in the 200m championship during New Balance Outdoors, though she did run a personal best of 23.92. 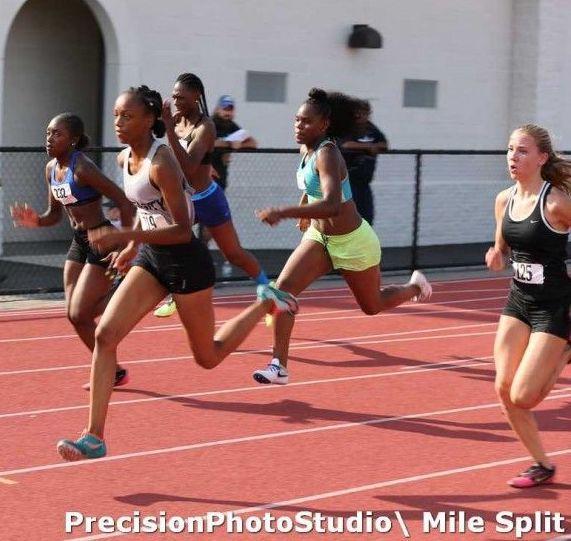 During New Balance Indoors, though, Johnson put Battle in the Emerging Elite division rather than the championship, thinking the junior wasn't quite ready. Battle was sixth in the final in a time of 24.85.

"That was her first really big stage," Johnson said.

Today is a different story. Battle is ready for anything. In the 60m dash, where Battle says she sometimes has issues with block starts, she's produced a season best of 7.55.

"Her weakness was acceleration, but now I feel like it's a strength," Johnson.

Battle has some thoughts about that race, too.

"There's nothing you can do wrong in that race, because the outcome can mess up," she said. "The drive phase is really needed. I've been getting that down. I've been on it, my starts, arm splits, my drive. I can actually conquer the 60."

That's because Battle is hardwired for improvement. Her study habits are insatiable and they even include watching tape of her starts and studying professional runners on YouTube.

"I know sometimes I have to bring my knee forward, instead of back kicking," she said. "We practice that."

At Wayne Memorial, a public high school located 15 minutes outside of Detroit, Battle fits into a crowd of about 1,700 students. There, she says, she's low key to a fault -- unless you butcher her name, which she says 80-percent of people do (it's pronounced A-NAY-VIA). But others have certainly noticed her ability and good-natured personality. In the fall, she was named homecoming queen.

As of recently, Battle has been helping raise the profile of the school that historically hasn't been known for athletic success. Her older brother, Montel Hood, was the state record holder in the 400 and an eventual All-American.

"That definitely helped us get on the map," Johnson said.

And now Battle is hoping for her own swan song. But her final year at Wayne Memorial is only just beginning. As the indoor season progresses, Battle has set her sites on a state championship and a breakthrough performance at New Balance National Indoors from March 10-12.

Though if she gets neither, she would be happy with something else.

"As long as people know I broke the record (in the 200), championships wouldn't matter to me," she says.

So as she steps to the line each meet, Battle keeps her motivations close to her chest.

She thinks about her grandfather, and the success that seems to be so close.

To have access to year-round stats, breaking news, stories and videos, register for Milesplit Michigan here.