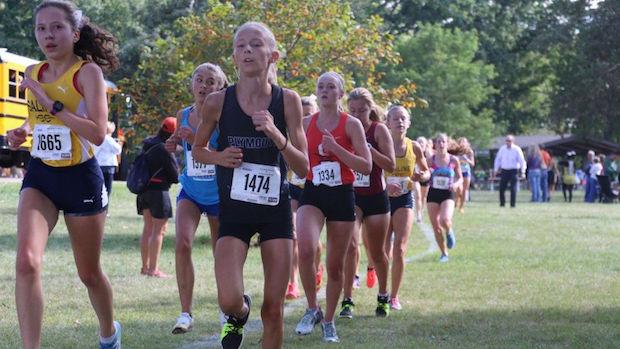 A change of venue (due to construction at the high school) didn't stop the Corunna boys from winning their home invitational to begin their D2 title-defending campaign. The Cavaliers placed 4 runners in the top 6 in the medium-school race. In the meet's largest division, Saginaw Heritage nearly swept the field, scoring 18 points, led by seniors Michael Fiore and Nick Sonnenberg. The day's fastest time was run by Chandler Lorf of Flint Powers Catholic, with a PR of 15:41.05. On the girls' side, Flushing topped Saginaw Heritage for the meet win in the largest division. Heritage senior Lynsey Amthor won the race in 20:00.40. Goodrich's Jillian Lange won the medium-school division with an 18:35.32, leading her team to 2nd in the race.

Sam Martens of Holland and Madeline Rehm of White Lake Lakeland won the junior/senior races at the rainy Mustang Invite in Northville. The Northville girls, likely to be title contenders in November, were the most impressive team even without many of their top runners; the host team won the freshman/sophomore race by 54 points. Lakeland and Romeo appeared to be the best boys' teams in the split meet, with Canton also performing well with a win in the freshman/sophomore race.

Although team scores were not kept, the Saline Early Bird still had a lot to offer on Thursday. Chelsea senior Tom Oates ran a state best (and personal best) time of 15:31.9 in the Blue Race, and junior Nick Foster led his powerhouse Ann Arbor Pioneer squad with a 15:38.7 PR to win the Gold Race. Two other boys, Ethan Byrnes and Carter Solomon of Plymouth, also ran under 16 minutes. Alexa Keiser, a sophomore from Fenton, was the meet's fastest girl, finishing in 18:43.6 at the front of the Gold Race; the small-school Blue Race was won by Lily Durham of Ann Arbor Christ the King in 19:07.8. Two freshman girls, Pinckney's Vivi Eddings and Holly's Andrea Ruiz, finished second in the Gold and Blue races, respectively, both going under 20:00.

Saugatuck swept the individual titles, and split the team titles with fellow D3 school Pewamo-Westphalia, at the Yellowjacket Invitational in Ithaca. Junior Corey Gorgas ran the fastest D3 time of the year so far with a 15:40.0, 25 seconds ahead of his freshman teammate Nik Pettinga. The duo helped Saugatuck to a ten-point win over Pewamo-Westphalia. In the girls' race, Pewamo-Westphalia placed three runners in the top five to defeat Saugatuck by twelve points. Saugatuck junior Thea Johnson set a school record with her winning time of 18:48.7, nearly a minute ahead of the chasing pack.

The 9th annual edition of the Golden Grizzly Invitational, a 4000-meter race at Oakland University, produced plenty of impressive times. L'Anse Creuse North's Karenna Duffey began her senior season with a winning time of 13:58.7, followed by Rylee Robinson and Katie Osika, both of Waterford Mott. Troy, expected to perform well at the state meet in November, won the meet with 47 points to runner-up Lake Orion's 70 points. Senior Michael Tremonti of Brother Rice won the boys' race in 12:29.5, ten seconds ahead of fellow senior Austin Remick of Rochester. Salem won the team title by 19 points over Oxford. D2 school Pontiac Notre Dame Prep impressed with a third-place finish in each gender and three top-ten finishers in a primarily D1 meet.