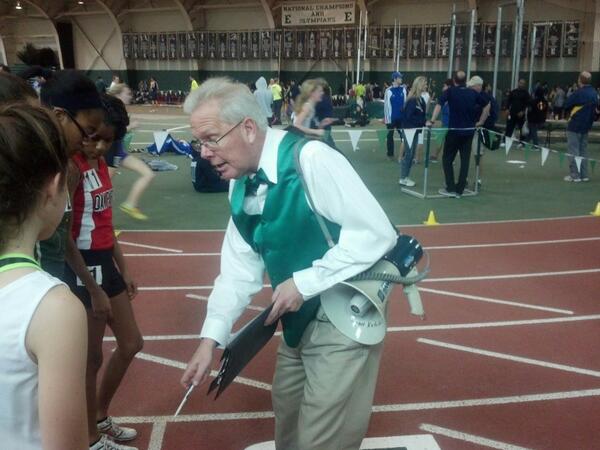 Day 1 of the Huron Relays went off without a hitch. It may have been "small schools', but there were plenty of big names and big performances to get the outdoor season going. Here are a few performances that stood out from Day 1:

Boys Pole Vault: Senior, Travis Weiss from Chelsea High School won with a personal best height of 14-6. That height also would have won the vault on Saturday!

Boys 60 Meter Dash: Another Chelsea High School senior, Berkley Edwards, continued his absolute dominance on the state of Michigan in the 60 dash, winning the race in 6.93. Sophomore, Samuel Beal from Ottawa Hills finished second with a time of 7.00 after going to New Balance Indoor Nationals and winning the 200 at the MITS State Meet in late February.

Girls Shot Put: Ashley O'Neill from Dearborn Divine Child had a throw of 41-10 to win the shot by over 5 feet. The throw also would have won on Saturday by about 6 feet!

Girls 4x200 Meter Relay: Had to be the race of the day, especially with an extra little bit of competition as a Michigan team, Divine Child, dueled with Gary Lew Wallace High School, who drove up all the way from Gary, Indiana. Divine Child won the race by .05 seconds as the teams ran 1:48.57 and 1:48.62 respectively.

Although the day may have appeared to be dominated by Grosse Pointe South in their attempt to break the Distance Medley Relay national record, it was really a collection of great races and field events all day that reminded everyone how great track and field is. Here are some day 2 performances that stood out:

Girls High Jump: Just one inch off of her personal best, Aubryn Samaroo from Grosse Pointe South clears 5-4 to continue her indoor dominance in the event after winning MITS indoor state championship with a jump of the same height.

Girls Long Jump: Aaron Howell from Farmington High School won with a jump of 18-1, just about 3 inches off of her personal best. Not a bad way to start your senior track season.

Girls 60 Meter Hurdles: Although Quenee' Dale, from Saline, had a bit of a rough weekend in New York at New Balance Indoor Nationals, placing 6th, Dale appears to be fired back up and ready to assert herself as the states best short-distance hurdler running 8.87.

Girls 1600 Meter Run: Trying to match her Saline teammate, Elianna Shwayder took the lead in the 1600 from gun to finish line, finishing in 5:07.75. Over the past year, Shwayder has put herself in conversation with some of the top distance runners in the state; and when you're a top ditance runner in this state, you are in some national conversation. Shwayder was followed closely by Rachel Coleman from Northville, 5:08.68, Kennedy Beazley from Ann Arbor Huron, 5:08.90, and her teammate, Lauren Green, in 5:09.23. Four girls under 5:10 in the first meet of the season has to make everyone excited for this season of track!

Girls Distance Medley Relay: Once again, the girls from Grosse Pointe South came to Eastern Michigan to put on a show for everyone in attendance. The national record of 11:35.43 seemed so do-able as each girl had come off of a pretty good New Balance Indoor Nationals just two weeks before. Haley Meier led off and had to run under 3:32.1 to be ahead of pace, she did, and handed off to Kelsie Shwartz after a 3:30.3, putting them about two seconds ahead of the record. Shwartz whisteled around the track in a 60.5, but the record pace was set at 58.6. As Kelsie handed off to Ersula Farrow, the were back even and needed a 2:17.7 to stay on track. Farrow got into the rhythem we are all used to seeing and dropped a 2:14.4 to put them up three seconds on the record going into the final leg. Hannah Meier took the batton needing to run a 4:50 or better to get the record, but found herself slowly slipping off the pace as all she had to run with was lapped runners. Hannah finished with a 4:50.8. They missed the record by a mere .55 seconds. I hope Michigan track fans realize how spoiled we are, for getting to go to almost any meet and being able to watch performances like this. It is truly unreal.

Boys 1600 Meter Run: A little pushing and shoving from our lead pack all throughout the race made this one of the closest and most entertaining races of the day. Andrew Kitto from Saline put on one of his famous "kicks" as he moved from about five meters back of Dan Sims from Northville on the final lap, to push it right to the wire until Sims outleaned Kitto to finish in 4:23.95 and 4:23.99 respectively. Lucas Arrivo from Ann Arbor Pioneer wasn't quite able to stay with Sims and Kitto as he finished third in 4:24.82. 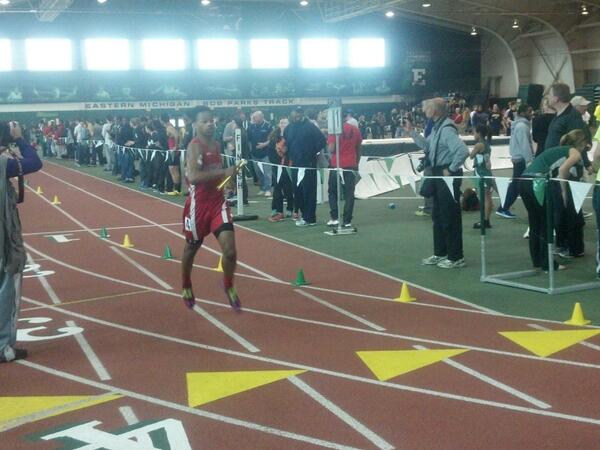