Cole Johnson, who is one of the state's top cross country and distance runners, has collected four race wins during the early stage of the 2018 outdoor campaign.  The Rockford senior is currently ranked fifth in Michigan in the 3200 and sixth in the 800, despite taking time to work his way into the season at a variety of dual meets.  Among Johnson's extensive list of career accomplishments are his victory in the 1600m race at the 2017 MHSAA State Championship and impressive pr's of 1:50.72 (800), 4:08.60 (1600) and 15:12.00 (5K / XC). The University of Michigan signee has tested himself at elite competitions such as New Balance Nationals Indoor and New Balance Nationals Outdoor over the past few years.

MileSplit Michigan caught up with Cole to talk about his running career to this point, his training and what he hopes to accomplish during the 2018 outdoor season.

What meets will you be competing at this season and what goals do you hope to accomplish?

The MSU Spartan Track Invite on April 27th will be a good meet to get a fast time early in the season.  Last year, I soloed a 4:09 there and I'll be looking to run fast again.  The MHSAA State Finals is the biggest meet during my Rockford High school season and that takes place on June 3rd.  Throughout the season, one of my goals is to always try to get as many points as possible for my team.  My main individual goal this season is to break Dathan Ritzenhein's 4:05.90 school record in the 1600m.  Another goal is to earn more individual state titles and to help my team to a high finish at State's.  Also, I would like to get into the top post-season meets, like the Brooks PR Invite.

Talk about what your training routine resembles.

My training I assume is similar to most programs, with base building in the summer / winter in preparation for the upcoming season.  During this past outdoor track season, I have found workouts of high intensity and limited recovery to be very beneficial.  I think that my improvements in the 800m can be attributed to these kind of workouts.  Throughout the season, we routinely do core and strength exercises to complement running.  Furthermore, I take an advanced conditioning class in the winter that is often in the weight room.  Come outdoor track season, the muscular endurance I've developed has proven to be helpful. 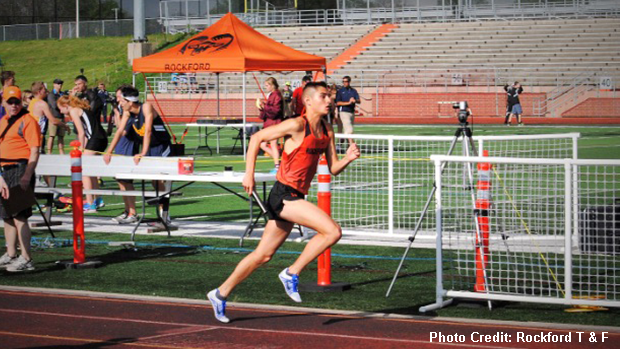 Cole Johnson credits his coaches for much of the success that he's achieved.

What other athletes do you admire and who, other than yourself, motivates you to maximize your potential?

When it comes to other athletes that I look up to, Dathan Ritzenhein has greatly impacted me.  Not only has he given me records to shoot for and a sense of school pride, but he has given advice to me and my team. It's been awesome to have him back in town.  Also, I've been fortunate to have run against Michigan's top athletes like Grant Fisher and Donavan Brazier.  They've made it a prestigious honor to be one of Michigan's fastest and that has motivated me.  I can speak for the state and say that a lot of the top distance competitors are good friends.  We're constantly pushing one another and congratulating each other, as well. It has created an environment where everyone is constantly trying to reach their potential in order to compete with the best.

It has been a blessing throughout my Rockford career to have teammates who push me, motivate me and hold me accountable.  As far as team chemistry goes, we are a tight knit group of guys.  Practices are enjoyable when you're running with your friends everyday.  Credit is due to our coaches, who not only control a big group of wild dudes, but provide us with an environment to be successful.  With the great success that we've had when it comes to championship season, including two state titles in cross country, it is clear that they are among the best.  Coach Martin and Miller, thank you.