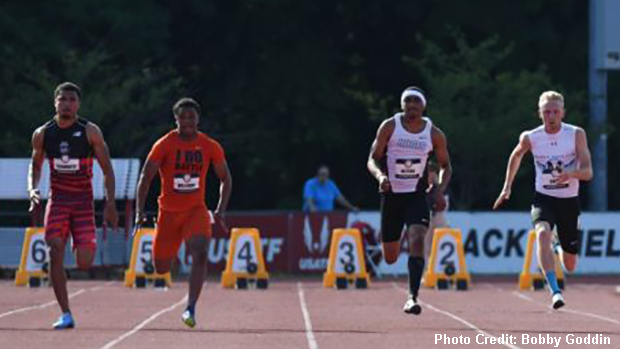 Former East Kentwood stand-out sprinter, Khance Meyers represented himself admirably at the IAAF World U20 Championships in Tampere, Finland earlier this week.  Meyers finished sixth in the 200m finals due to his 20.87 effort.

The Hinds Community College (MS) rising sophomore posted exceptional results in the opening round and the semi-finals to position himself to compete in the finals against a collection of the world's best junior-aged athletes.  His 20.70 clocking was good for first place in Heat 1 of the opening round and he followed that up with another first place showing in the semis (Heat 2), where he recorded a time of 20.79.

Meyers officially closes an outdoor season that saw him set a National Junior College Athletic Association all-conditions record of 20.02 (+2.7) back in May.

Khance is obviously a tremendous talent, but I think what people should know about is his passion for track.  He truly loves the sport and he spends each day attempting to improve.  It has been a very rewarding experience to watch him grow as an athlete over the years.  Nothing on the track that Khance accomplishes will ever surprise me.

Great first round run by @KhanceMeyers for @usatf this morning at @iaaforg U20 200! Looking for him and @LAMARR__4 on the medal stand later! Khance is an @ekfnt and @HCCTrackField legend already! pic.twitter.com/dwTzGC5TNK