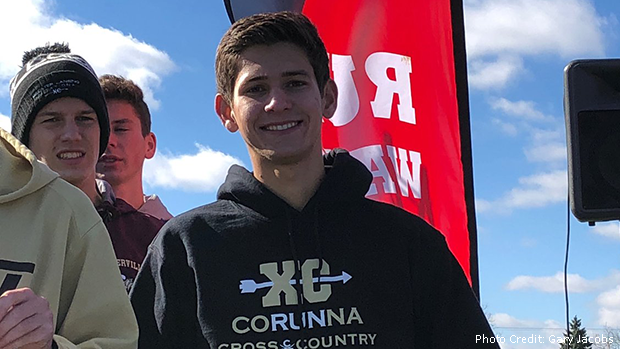 Ben Jacobs continued his stellar cross country season at last week's Greater Lansing Championships, where he claimed the win in 15:50.90.

The Corunna senior has collected six victories and a runner-up finish in his seven starts and he currently resides at number eighteen in the state's rankings due to his 15:34.68 clocking at the Greater Flint Championships on October 6th.

Jacobs' career highlights include a pair of top ten placements at the MHSAA State Championship LP-2 (9th in 2016 and 3rd in 2017), as well as a second place showing in the freshman / sophomore contest at the 2016 Foot Locker Midwest Regional.

MileSplit caught up with Ben to gain more insight on his performance.

What did your training look like in the lead-up to the Greater Lansing Championships?

Break the race down and talk about how each mile unfolded for you.

The course conditions were very soft and wet so I knew I wasn't going to be able to run really fast.  However, the temperature was about 40 degrees at race time which was perfect for me because I tend to perform well in cold weather.

This was also the first time that my team was fully healthy this season and we were only ranked twelfth in Division 2 heading into the race, so the Corunna Cavaliers ran like they had something to prove!

The race started out much faster than I was expecting in the first 200m, so I had to re-adjust and work on getting up front with the Holt athletes.

The rest of the first mile played out according to plan.  I felt like Alex Penski from Holt was trying to break me, as he really pushed in the early going but I refused to get dropped.  Me, Alex and Adugna Moritz went through the first mile in 4:47.

Shortly into the second mile, there was a big hill to climb and I could tell that the Holt runners were tired from the first mile so I wanted to push the pace to test them and see how they'd respond.  They both picked it up immediately and passed me back which told me that they really didn't want me to assume the lead.  At that point I sat back and worked with the lead group.  Any time that the pace slowed, I'd jump up to the front which made everyone pick it up again.

This was the rhythm of the race until there was about 1.25 miles to go.  At that point, I picked it up and no one passed me back.  I switched gears and really started to work hard.  I went through two miles at 10:07 and just after the marker there was a significant downhill.  I really brought the heat going down that hill and then it was me running solo until the finish line.

I feel like I could have run faster, but it wasn't a day where conditions presented an opportunity to achieve a pr.  I just wanted to compete hard and take the individual win and also help lead my squad to the team title.  Corunna ended up winning with 114 points.