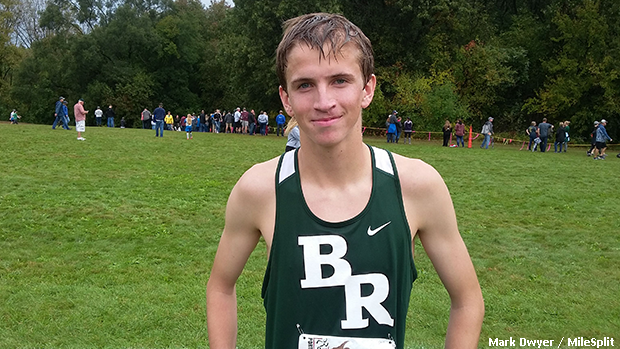 Sam Sharnas opened his indoor track season with a strong showing at last weekend's MITS - GVSU Meet #1 in Allendale.  The senior, who attends Holland Black River, posted a time of 4:25.77 to earn a runner-up finish in the 1600m race.  This result represents a new indoor pr and it's only slightly off his outdoor best of 4:25.73, which he achieved during his junior year at the Kent City Region meet.

MileSplit caught up with Sam to discuss his season opener and to learn about his upcoming goals.

You had an impressive first race of the season - describe how it went from your perspective.

There were around 25 guys in my heat and the race actually got called back after an athlete fell in the first 10 meters.  The pace started fairly quick - I think my 400m split was around 65 seconds and then the lead runner and I came through 800 at about 2:14.  From that point onward I did my best to hang on to the leader.  Despite the fact that I faded over the last 200m, I was pleased with my time which was a 10 second improvement from the same race last year.  My younger brother, Max was also in the field and he ran a pr of 4:34.90, so that was especially fun to see.

What were you hoping to run in this race and what are you goals in general moving forward?

My coach, Phil Jones, and I did not have a set time goal for this race.  Following the cross country season, I took four days off and I've been running 25 to 30 miles a week since that time.  I plan to increase my mileage and race a few more 1600's this winter.  My goal is to get my time down to about 4:20 by the end of the season; this would give me a lot of confidence and motivation to continue working hard during outdoor track.