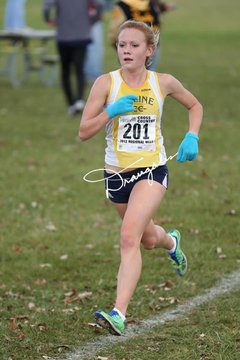 After an agonizing college search that included schools all over the midwest, Alyssa Cummings has commited to Ferris State University. Cummings was also considering Grand Valley State University where her teammate from a year ago, Amy Creutz, currently runs as well as Indiana Purdue-Fort Wayne (IPFW).

Alyssa was a four-year varisty runner on one of the best teams in the state over that period. In 2009, as a freshman, she helped lead Saline to its first cross country state title ever, then continued that with a runner-up finish to Grosse Pointe South in 2011 by a mear 5 points! The Hornets finished third this year in one of the most impressive state meets of all-time as the top three teams were seperated by just 32 points. All three of the teams were ranked 1, 2, 3 in the nation immediately following the race.

Cummings will be anxious to get outdoor this track season, following up another very solid indoor season earning all-state honors in the Distance Medley Relay on a relay team with her three sisters; Hannah, a freshman, Haleigh, a freshman, and Emma, just a sixth grader! Alyssa then headed to the New Balance Indoor Nationals where her relay team finished first in the Emerging Elite 4x800 running 9:24.75, and fourth in the 4xMile with 20:48.83.