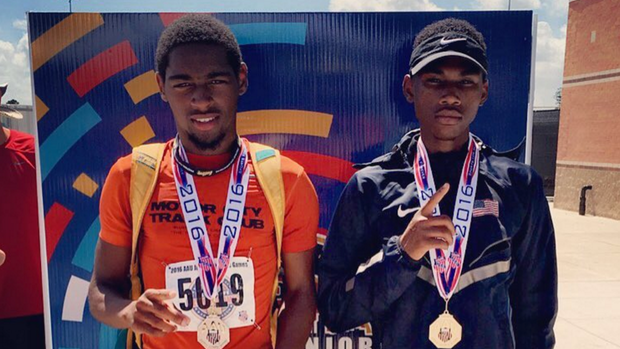 De'Karyea Freeman and Cameron Cooper after sweeping the 1500m at the 2016 AAU Junior Olympics.

1) What was your favorite moment of the 2016 outdoor track season?
DF: My favorite would be winning the 2016 MHSAA State Championship.
CC: Running the open championship 800m at outdoor new balance

Ended my track career with a state championship and a national title what more could I possibly ask for pic.twitter.com/euAzGMoBMh

2) When you look back at your 2016 performances, which one are you the most proud of?
DF: Definitely Winning the SMR at New Balance.
CC: Running 1:49.7 in the 800 as a 11th grader.
3) How important was it for you guys to prove yourselves to the rest of the country with the SMR national title?
DF: It was very important because honestly we were supposed to win indoor also so we had to make up for it.
CC: It was very important since we placed 2nd indoors.
4) You guys had a huge weekend at the AAU Junior Olympics. Which race was the most difficult, and how did you manage the heavy workload all week?
DF: The most difficult race had to be the 1500m, and we're kind of use to it.
CC: None of them were that difficult since I was the number seed in both the 800 and 1500 so I will say the 4x800 was the most difficult because we were running against the clock to beat the national record which we missed by .31 seconds. Im used to the load i did the same events all season including indoor 800, 4x800, 4x400, and 1600.
5) It's been an extremely long season for you guys, competing all the way from indoor into August. What are you looking forward to most now that track is over?
DF: Food!! I can finally eat hot cheetos and drink all the pop I can.
CC: Im looking forward to a great xc season I'm going to try to run low 15 or high 14 in the 5k.
6) The Motor City bus was stolen at the end of the AAU Junior Olympics, where does that rank in the craziest things that have happened to you guys at a track meet?
DF: That would be number 1..like how do you steal a whole charter bus from a gas station, and how hard could it be to find it?
CC: It's definitely ranked number 1. I would never think that a charter bus would get stolen.
7) It's an interesting choice to share a twitter account (@TheReal_dk2), how did that happen?
DF: I don't remember how this became but I think I needed someone to blame tweets on when I got in trouble and cam needed a twitter.
CC: When I transferred schools I didn't have a Twitter and De'Keryea offered for me to be on his.
8) Is there a trick to figuring out who is tweeting?
DF: Well most of the time its me. Cam mostly rt's things, but we were supposed to put "Dk" or "cam" at the end of every tweet but as you can see it didn't work out
CC: Not really you never know tbh unless one of put a dash and out initials.

Peep the differences between us finishing our races  pic.twitter.com/EHDp75ExkQ

9) After the success of this season, what are the goals moving forward?
DF: To have an even better season next year
CC:
10) Who are some of the people who have helped support you through your running careers?
DF: Since day 1 its been my coaches Coach Brandon and Coach Lynch have really supported me and helped me grow  and change for the good if it wasn't for them who knows what I would be doing
CC: For my senior year I want to run under 1:47 in the 800, hopefully 1:46. In the mile I want to break 4 mins, and I want more rings. I am the number 2 returning 800m runner.

1) Favorite post-race food?
DK: I don't really have one but surprisingly I eat McDonald's or Wendy's before a race.
CC: Chicken Alfredo w/ bowtie noodles and garlic bread
2) 800m or 1600m?
DK: Definitely the 800m.
CC: 800
3) Best pump up song?
DK: Don't really have a pump up song.
CC: Lil uzi vert- money longer and dance- cake by the ocean
4) Toughest Michigan athlete to race against?
DK: Toughest would have to be my teammate Cameron or Anthony Berry. I've never beat the two.
CC: De'Karyea
5) What Olympic event are you most excited to watch?
DK: Men and womens 4x400m.
CC: The 800