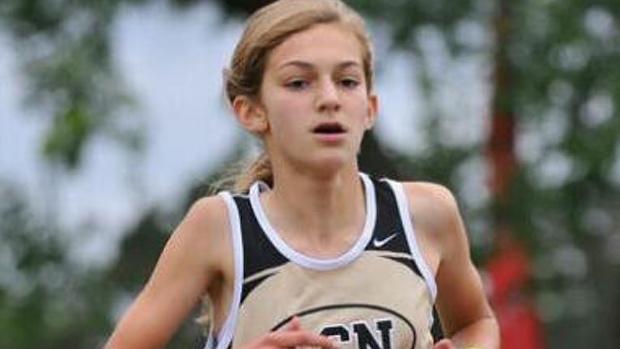 Perhaps no one outside of Macomb L'anse Creuse North's track and field team expected Karenna Duffey to win the 1600m on Sunday at the Michigan Indoor Track Series Championships at Aquinas College.

After all, the field was stacked with girls -- Anna Jensen, Anne Forsyth, Maggie Farrell -- who had tested themselves time and again over the indoor season at the distance.

Duffey, who had overcome a leg injury that hampered her 2015 cross country season, had just one race at the distance (1 mile) on her resume entering the field.

And while her time of 5:00.55 in the 1 mile at the Saginaw Valley State University meet on Feb. 11 paired well with her other competitors, it didn't quite translate to a winning performance. The 1-mile effort on Feb. 11 was U.S. No. 37 compared to three top 10 national times in the 1600m from Midland Dow's Jensen, Ann Arbor Pioneer's Forsyth, and Battle Creek Lakeview's Farrell.

But Duffey sure did crush those expectations.

The junior, a two-time third-place performer at the Michigan cross country championships, outkicked Jensen in the final 200 meters for a new personal best of 4:54.75 in the 1600m, giving her the nation's third-best time at the distance.

Her progression at the distance signaled at a big improvement, but by no means was the 4:54.75 expected on Sunday.

In December, Duffey told Michigan PrepZone's MLive.com, "Pretty much all I do now is school and running. I love it. It doesn't matter what else is going on in my life, running is something I do a lot of."

The expectations for Duffey heightened after her freshman cross country season, when she went 17:33.10 to finish third at Michigan's D1 championship.

But an injury limited her as a sophomore, halting her to a 14th place performance. As a junior, she didn't break 18 minutes but still finished third again at the state's cross country championship in 18:01.00.