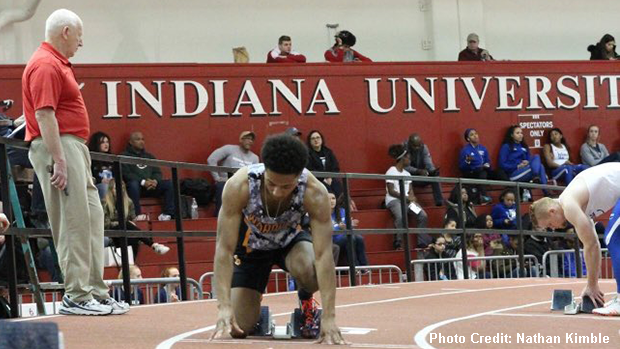 Brandon Smiley, formerly of Livonia Franklin, has made a seamless transition from high school to college track competition, as the freshman has set a barrage of personal bests in the early phase of his career at Indiana Tech.  Among Smiley's highlights are his outstanding 20.99 effort in the 200m event and his 10.78 showing in the 100m race at the highly competitive Raleigh Relays.  Both results represent new pr's.  Smiley's progress has not gone unnoticed, as he was recently named the NAIA National Track Athlete of the Week and the Wolverine-Hoosier Athletic Conference Athlete of the Week.

MileSplit Michigan had an opportunity to catch up with Brandon to gain more insight on his experiences at Indiana Tech and to learn about what his goals are moving forward.

What accomplishments are you the most proud of so far in your college career?

At Indiana Tech, my biggest accomplishments are qualifying for Indoor Nationals and becoming an All-American in the 200 and a National Champion on the 4x4, splitting a 48 flat.  Also opening up 20.95 was huge for me and a major pr; it was wind-aided, so running a legal 20.99 the following week was a great confidence booster.  By doing this during my freshman year, it's very eye opening because my high school times were 21.92 and 11.1 (senior year) and not even a year later, I have dropped a whole second in the 200 and ran 10.78 in the 100.

What adjustments did you need to make in order to succeed at the college level?

The biggest adjustment from high school to college is the level of competition at meets and within my team having people at my speed or faster than me has motivated me to get better.  The travel has taken some getting used to, as I have to manage my school work during road trips.  It can be difficult, as competing in college track cuts into class time.

What goals do you have set for yourself?

After becoming a National Champion during the indoor season, I would not only like to repeat in that in outdoor but also win as a team so that we can all get rings!  In addition to that, we are ranked #1 in the 4x4, so I would love to get that win.  As for individual goals, I plan to run 47 mid in the open 400 and I also hope to hit the 100 standard of 10.6.  In time, I intend on breaking my school's 200 record which is 20.6.

What coaches and teammates have helped you get to this point?

My teammates Matthew Lockridge and Kejavon Moore have helped me tremendously due to Lockridge running 6.76 and Moore running 6.65 in the 60.  One was an All- American and the other a National Champion, so practicing with them and getting killed in every block start has made me strive to be better.  It truly humbled me to lose every rep and it drives me to improve.  My head coach, Doug Edgar, has pushed me with his hybrid workouts between long and short distance and his reassurance that he always thinks I can go faster.  I also credit my AAU coach, Jamal Johnson.  He helped in my transition to college competition and he always provides me with insightful feedback regarding my training and racing.  I now consider him a close friend.

A big thing that drives me in every meet that I attend is the amount of colleges that told me that I wasn't fast enough or those who simply wouldn't even respond to me when I reached out to them.  When I see Division I teams and coaches at the meets we compete at, I take it as a further opportunity to prove myself.

I was excited when Brandon came to us in the summer of 2016 as a junior.  He was an athlete at a school in my school's division (KLAA South), so I already knew the type of talent he had as I saw him three times per season.  I couldn't wait until he was done playing football his senior year so he could join us for his first indoor season.  He qualified for NBNI and took fourth at the Indoor State Meet in the 200.  Brandon came back motivated for the summer after competing at the Midwest Meet of Champions and following his strong spring season.  During the summer, he was able to improve his 200 to 21.60 and I think this gave him the confidence he needed heading to college.  In my opinion, Brandon was one of the most under the radar athletes of his class.  The success that he's experienced early in his college career is evidence of that.