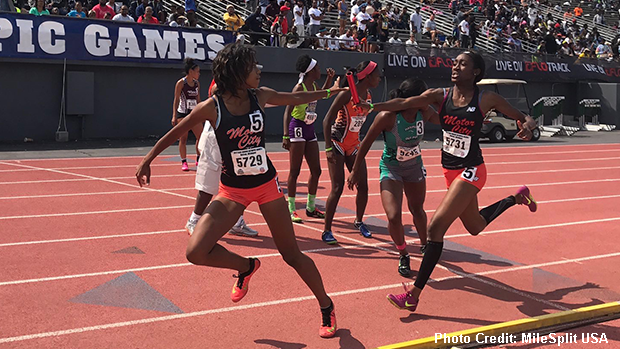 Aasia Laurencin handing off to teammate, Jayla Jones at the 2017 AAU Junior Olympics.

Oak Park's Aasia Laurencin has enjoyed an excellent start to her 2018 outdoor track season, evidenced by her two state leading times.  The sophomore resides on top of Michigan's leaderboard in the 200m and 100m hurdles events due to her 25.83 and 14.43 results that she posted at last week's Southfield At Oak Park Dual meet.  The former gymnast and cheerleader began competing in track through the encouragement of one of her coaches in middle school and she's never looked back.  Laurencin immediately experienced success, as she broke school records and went on to place fourth in the 100m race at the 2016 AAU Junior Olympics.  She currently owns pr's of 12.09 (100m), 24.34 (200m) and 14.43 (100m hurdles) and she's got her sights set on lowering those times to 11.70, 23.30 and  13.60, respectively.  For now, Laurencin is focused on achieving US No. 1 times in her key events, however in the future she hopes to compete for a college that has a great track program, earn her degree, turn pro and eventually represent the USA at the Olympics.

MileSplit Michigan had an opportunity to speak with Aasia about how her season is going, what her training looks like and what goals she hopes to accomplish in the future.

How has your season gone thus far?  What have been your biggest accomplishments?  What areas are you hoping to improve upon?

I had a very good run during my indoor track season.  I came out as the 60 hurdles State Champion, I set a new pr in the 60m (7.67) and in the 200m (24.95).  Also, I competed at New Balance Nationals Indoor in the 60m hurdles and I made it to the semi finals.  I am very proud of myself for my indoor season because I have only been doing hurdles for less than a year and I left with new personal bests.  My opening meet of the outdoor season was good in the 100m hurdles, but in the 100 and 200 I believed I could have run much faster.  My biggest accomplishments were second place in the 60m freshman events at NBNI and the first time being an All-American.  I'm also very proud of being All-State, the 60m hurdles State Champion, fourth in the 100m at the 2016 AAU Junior Olympics, eighth in the heptathlon at the 2017 AAU Junior Olympics and my 56 second split in the 4 by 4.  The areas that I'm hoping to improve on are my block start, my quickness, calming down my nerves and being first to the first hurdle.

What are your goals for the remainder of the season and beyond high school?

Oak Park is one of the strongest programs in Michigan.  Talk about what your training is like.  Are there athletes on the team that push you to be your best?

The training at Oak Park is extremely hard.  We only have a relax / easy day when we have a meet the next day.  I mostly do a full flight of 5 step hurdles, 300 repeats, 350 repeats, 200 repeats, 150 repeats, 100 repeats and sometimes a 300 hurdle workout.  Even though the practices are difficult, it helps us to hit our big times that we want to run.  My whole team pushes me to be the best because they depend on me and I want to be the best. 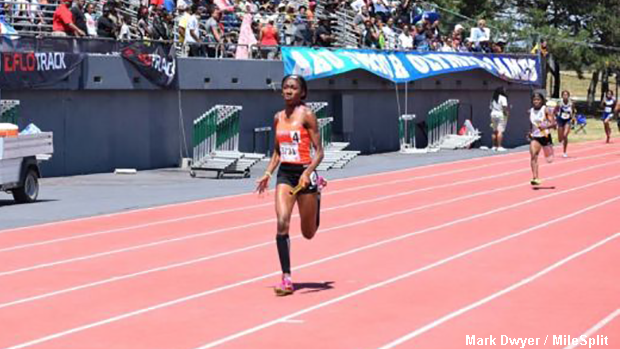 One of Aasia Laurencin's future goals in track is to compete at the Olympics.

What meets are you looking forward to competing at this year?

The meets that I'm looking forward to competing at would be the Dayton Roosevelt Memorial Invitational, the OAA Gold Championships, States and New Balance Nationals Outdoor.

Is there anything else that you want to share about yourself or your teammates?

I'm 15 years old, a 4.0 student, in the 10th grade and I have a great love and passion for track and field.  Coach Brandon Jiles and Coach Robert Lynch both helped me become a better athlete.  They have done a lot for me and I want to say thank you to them and that I appreciate it.  My track teammates are like a big family to me.

Aasia is one of the most talented athletes that I've ever coached.  She's blessed with great height, speed and focus.  Aasia's ability to manage her academics and athletics has been very impressive, as well.  She takes advanced courses, she's is a member of the National Honor Society and she still manages to never miss a day of practice.  Because she is so new to the sport, she is still learning the nuances but she is a very fast learner.  Despite only running hurdles for a year, she has established herself as one of the best in the nation.  The times she has run in the sprints over the past two seasons show that she's an athlete with the versatility and talent to compete at the professional level one day.