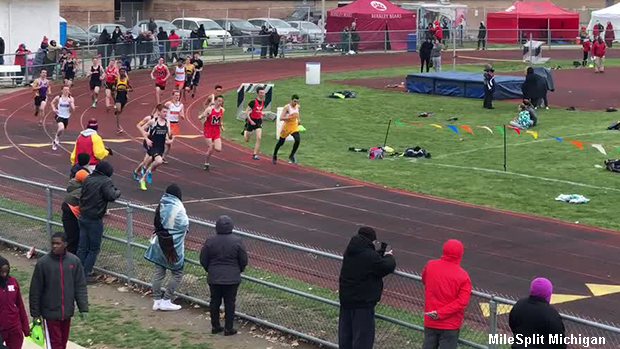 The boys 1600m Heat 2 race was one of many exciting contests at the Charger Invitational.

MileSplit Michigan was on-site to cover the track and field action at the recent Crestwood Charger Invitational, which was hosted by Dearborn Heights Crestwood.

Taylor Rucker and Mizan Thomas each collected a pair of impressive event wins.  Berkley's Rucker won the 100m hurdles and 300m hurdles races with her times of 15.12 (Michigan No. 8) and 46.21 (Michigan No. 7) and Thomas, who represents Detroit Renaissance, finished first in the 100m and high jump events due to her results of 12.49 and 5-0.

Westland John Glenn's Alona Olshevska broke the one minute barrier on route to winning the 400m race.  The senior's finishing time was 59.88.  Mackenzie Fields of Berkley won the 200m event due to her 25.97 result.

Garden City's Chaunzey Motley jumped 6-3 to win the high jump event and Jake O'Reilly of Lutheran Westland captured the 300m hurdles victory due to his time of 42.78.  Jack Rankin, who represents Orchard Lake St. Mary, posted a time of 4:32.20 to finish first in the 1600m race.