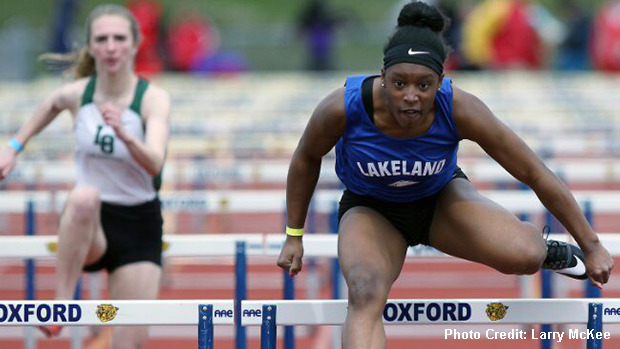 White Lake Lakeland's Grace Stark is listed at No. 23 in the latest MileSplit 50 rankings.

Four of Michigan's own have been included on the most recent MileSplit 50 list, which subjectively ranks the top track and field athletes from throughout the country.  Ericka Vanderlende (Rockford), Grace Stark (White Lake Lakeland), Olivia Theis (Lansing Catholic) and Nick Foster (Ann Arbor Pioneer) have all had outstanding 2018 outdoor campaigns to this point and their efforts have not gone unrecognized.

See below each athlete's ranking along with their key accomplishments so far this season.

Stark is ranked second in Michigan in the 100m hurdles event and she's also inside the top ten in both the 100m and 200m due to her season best times of 12.12 and 25.50.  The White Lake Lakeland junior has been a regular on the MileSplit 50 since its debut during the 2018 indoor campaign.

Theis is the number one ranked 3200m athlete in the state due to her outstanding 10:03.95 effort at the Shepherd Blue Jay Invite and she trails only Grand Haven's Gabby Hentemann, Rockford's Ericka Vanderlende and Birmingham Seaholm's Rachel McCardell in Michigan's 1600m rankings.  She's currently listed at No. 2 in the country's 3200m rankings.

Foster leads Michigan's 1600m and 3200m rankings due to his impressive times of 4:08.16 and 8:54.80.  He's collected a total of eight race wins during 2018 outdoor with his lone defeat being a close runner-up finish to Rockford's Cole Johnson in the 1 Mile event at the Golden Triangle Invitational.