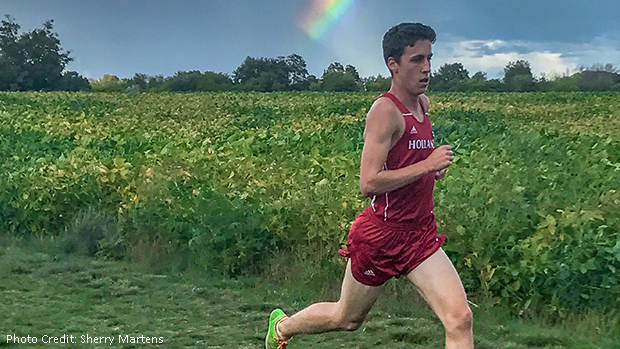 Sam Martens is a senior at Holland, who is currently ranked seventh in the state due to his 15:34.00 first place showing at the Muskegon Catholic Central Invite on August 25th.  The multiple time Foot Locker Midwest Regional veteran has taken two wins, a runner-up effort and an eighth place finish during the 2018 cross country campaign.

Martens informed MileSplit that he's been running for the majority of his life.

"Ever since I was young I can remember being at a race or a running event with my parents."  "Running has just always been a part of my life."  "I became very serious about running during my freshman year and began to devote a lot of my time and energy toward becoming the best runner that I can be."

MileSplit tracked down Sam to discuss his achievements to date and what he's looking forward to in his running career.

Your 15:34 from earlier in the season was a new 5K pr.  What kind of training did you do over the summer to enable you to run so fast so early?

This summer I devoted several hours every morning into running and enhancing my abilities.  Throughout the summer I gradually increased my mileage, eventually reaching 65 miles a week and then leveling off there to make sure that I didn't burn my body out before competitions even started.  I also focused on my strength and efficiency with running.  I began going to the weight room several days a week so I could enable my body to create more power when running.

Describe your performance at the Muskegon Catholic Central Invite.  Did you face any adversity in the race?  Did you execute your pre-race plan?

I knew entering the Muskegon Invite that I would have to go into the race and get off the front and just grind it out.  It was a cool and rainy morning, but I was actually quite glad to have that kind of weather.  It's a flat and fast course so I knew I would just have to consistently keep pushing myself to have a performance that I'd be happy with.  Honestly I didn't expect to run a time that fast at such an early stage of the season, but I'm really happy with how it unfolded and I was confident in my ability to perform well.

What big meets do you have on your schedule coming up and what goals are you hoping to achieve this season?

One race I recently ran at was the MSU Invite and I was happy with my time and place.  I ran 15:39 and placed 8th which is roughly 15 seconds faster than I ran last year and placed 7 spots ahead from where I was last year, as well.  So I'm glad that I'm continuing to improve and run faster times than the year before.   My next big races coming up are the Otsego Invite and the Portage Invite.  I hope to run course pr's at both races and contend for some of the top spots in the field.  This season my goals are to finish in the top three at the state meet in division one, run low 15's and even have a shot at breaking 15:00 for 5K.  I would also like to go to the Foot Locker Midwest Regional and compete for one of the top ten spots that qualify you for Foot Locker Nationals.

Looking beyond your senior year, what are your long-term goals relating to cross country competition?

I plan to run in college and I am currently still looking at schools.  I'm enjoying the recruiting process and getting to know coaches from all across the country and seeing what their coaching styles and philosophies look like.

Lastly, who are the teammates, coaches or mentors that have had a positive impact on your training and racing?

One of my biggest supporters is my teammate and girlfriend, Shayna; she is a big reason why I am able to get through some of the tough practices and races that cross country has had me endure.  Also, both my dad / coach and mom really motivate me to be the best runner and person that I can be.  They help me through the thick and thin and I know I would not be as good as I am without having them next to me every step of the way.  My other coaches and teammates also have my back when I need it the most, encouraging me to reach my full potential and achieve at the highest level that's possible.