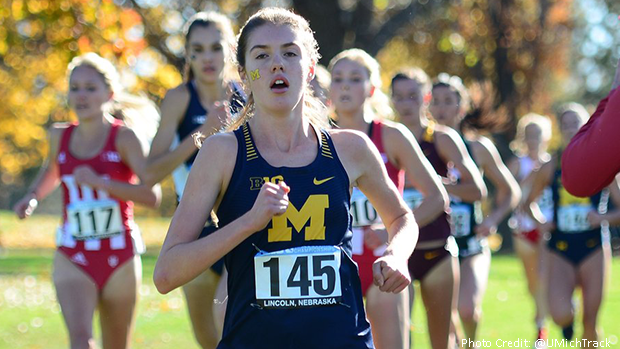 Anne Forsyth posted a 6K time of 20:16.20 for eighth place at the Big Ten Championships.

Former Ann Arbor Pioneer stand-out, Anne Forsyth was named the Big Ten Conference Freshman of the Year following her eighth place effort at the conference championships this past weekend.

Forsyth went 20:16.20 in the 6K contest and played an integral role in helping her squad to first place in the team standings.  Led by Avery Evenson, who finished third individually in 20:12.80, the Wolverines recorded 57 points for the win.

As noted in the University of Michigan's press release, Forsyth is the school's tenth freshman of the year recipient and the first since Erin Finn in 2013.

MileSplit contacted Anne for her reaction to the news.

This award means a lot because it represents more than just an individual achievement.  To be able to score in a Big Ten Championship and help my team to a close victory is an amazing feeling and I am honored to be able to contribute to something so rewarding; it still doesn't feel real.  Go Blue!

Anne Forsyth is the Freshman of the Year

Mike McGuire is the Coach of the Year