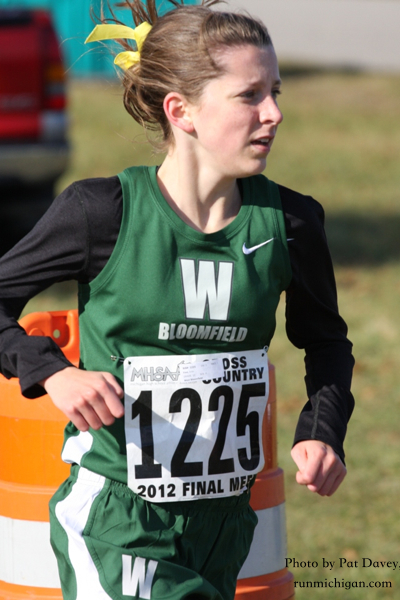 BROOKLYN, Mich – “I’m back!” said a delighted Erin Finn after her MHSAA Lower Peninsula Finals Division 1 title defense – and after she overpowered the field the way she did Saturday at Michigan International Speedway, who could say otherwise?

The smoking 17:07.9 for 5,000 meters posted by the US#7 West Bloomfield senior was a PR over hill and dale (her track best is the indoor national record of 16:19.69) and certainly indicated she’s back in the national championship picture (she was second at Foot Locker Finals in 2011).  She looked very close to being fully recovered from an iron deficiency (diagnosed Oct. 10) that probably contributed to her early-season loss to Julia Bos and certainly affected her slower-than-typical victories in mid-season.

How close to top form was she Saturday?  Ninety percent?  “I’m getting there,” she said.  “I keep feeling better each week.  I never prayed so much before a race before as I did today.”

Like Finn, there was indeed a healthy handful of individuals and teams that could claim they were “back” on a partly cloudy, cool (40s) day where the winds were mostly friendly and the course ran faster than normal – “back,” that is, in terms of getting back atop the podium.

The aforementioned US#4 Grand Rapids Christian senior Bos defended her 2011 crown in Division 2 with a decisive triumph of her own, clocking 17:20.4 and winning by nearly 30 seconds.  Fans will eagerly await her likely clashes with Finn at Foot Locker Midwest and Finals.

The US Honorable-Mention Highland-Milford boys, ranked #1 all year in D1, crushed the field in their race with 83 points, winning by 84.  They not only repeated, but claimed their fourth crown in 10 years.  H-M’s junior champion, Brian Kettles (15:07.3), was not a repeater but he was the heir apparent after his 2011 runner-up finish.

Breckenridge junior Kirsten Olling three-peated, romping over the Division 4 field and getting under 18 for the first time at MIS.  She is one of 16 girls to win at least three state titles in XC.

And Concord was certainly “back” in Division 4, too, repeating and making it three in four years.  Similarly, the D4#1-ranked Yellowjackets had their third individual titlist in four years, this time with super soph Jesse Hersha (15:32.3) rolling the field.

But all that said, there were also some bright, shiny newcomers claiming the huge team trophy that goes to the champions:

In a terrific girls D1 battle, US#24 and D1#1 Birmingham Seaholm won its first cross-country state title with 69 points, beating US#8/D1#3 Grosse Pointe South (88) and perennial power D1#2 Saline (101).  The three powerhouses were more than 140 points ahead of the rest of the field.  While GPS star Hannah Meier was second behind Finn, her twin sister Haley – recovering from mono – was back in 32nd.  But make no mistake, this Seaholm team is something special.

And earlier, in the morning, there was one more new claimants to a throne: D4 #5 Homer’s girls taking the smallest class over #2 Bear Lake, topping a previous high of sixth in 2011.

As for Division 3?  Jackson Lumen Christi has been both a boys and girls power for many years, but while their #2 girls title Saturday was the third in six years and ninth overall, the #4 boys won for the first time since 1979 – giving the program its first sweep.  It was heartbreak in both races for Grandville-Calvin Christian, as their two-time defending champion boys and their D3#1 girls were both edged out.

Check out deeper coverage on each race story page: