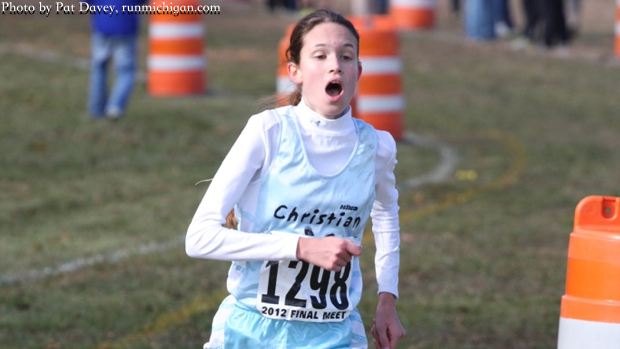 Julia Bos would have loved a big personal best to close out her in-state cross country career.  She had to settle, instead, for merely a very dominant repeat victory in Saturday’s MHSAA Lower Peninsula Finals Division 2 race at Michigan International Speedway.

The Grand Rapids Christian senior, unbeaten and ranked US#4, led Cedar Springs super soph Kenzie Weiler by nine seconds already at the mile (5:22) and it was just a matter of how fast she could go from there.  The answer was 17:20.4, which was 4.3 seconds faster than what she ran in her 2011 victory.  In both instances, Weiler was second, clocking 17:35.1 last year and 17:49.1 this time around.

“It was a pretty good race,” Bos said.  “I didn’t PR, and I was kind of hoping I could do that, but I feel incredibly blessed.”

Maybe it was the fact that her 2012 slate had already included eight performances under 17:40, including her seasonal best 17:18.21 to win her region the previous week.  Or maybe it was the fact that after a modest start over the first 600 meters, Bos really put the hammer down for the next 800 or so, and from there just couldn’t quite generate that epic, career-defining performance on her own as the winds strengthened in the early afternoon.

It wound up being Bos’s rival, Erin Finn, who produced the fastest girls’ time of the day with her 17:07.9 in the D1 race.  But Bos, who beat Finn at the Spartan Invite back in September, now has some time off from racing – presuming she decides on hitting Foot Locker Midwest again on November 24.  She was a stunning second in Kenosha in 2011, before taking 10th in the Foot Locker Finals in San Diego.  She could afford after her race to answer numerous questions about her unique mouth-wide-open running style (“optimal oxygen absorption”), whether she’d ever inhaled a fly (actually, a bee once), and, more seriously, about a “revelation” she had as a sophomore that led her to running “for God” and relieving the immense pressure she used to feel.

After Weiler, Hamilton senior Molly Oren was next in 18:03.3, then Bloomfield Hills Lahser senior Elena Miller got one for the other side of the state in fourth at 18:07.7.

Meanwhile, the team battle certainly saw a new champion, as #1 Ada Forest Hills Eastern upheld its ranking in style, scoring 93 points to #2 Spring Lake’s runner-up total of 150.  They were followed by Bos’s Grand Rapids Christian crew (182), Middleville Thornapple-Kellogg (186) and East Grand Rapids (231).  GR Christian and East GR had combined for eight of the past nine titles and, if you throw Thornapple-Kellogg in there, it extends to 11 of 13 – with only Gaylord (2007) and Battle Creek Lakeview (2002) breaking up that dominance.

Until Saturday, this is.  Forest Hills Eastern had placed as high as second in 2007 and was 14th last year.  They returned the top five from the 2011 crew, but it wasn’t so much that they were so much faster this time.  “We just did a better job this year of focusing on the little things,” said Coach Jeremy Hurley.  “Because of that, we were healthier and had fewer injuries.”

Senior Clara Cullen led the way for FHE, scoring fourth in 18:10.6.  Then they got a strong 28-second spread from their second-through-fifth girls, as junior Mary Kostielney (scoring 15th), frosh Lauren Allard (20th), soph Abagail Bowman (24th), and senior Angela Ottenwess (30th) left no doubt.  Ottenwess was the biggest difference-maker, as no other school tallied less than 60 points for their final scorer.