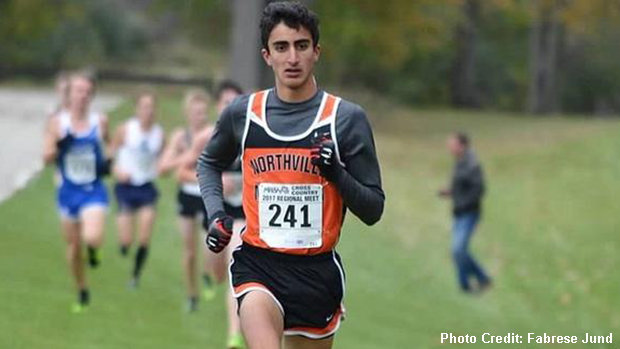 Northville's Nick Couyoumjian will represent the Indiana Hoosiers next year.

Many of Michigan's senior class cross country and track and field athletes announced their college choices on National Signing Day.  Some of the commitment news was expected as verbal indicators were provided over the last several weeks and other notices were shared for the very first time on Wednesday.

See the college signings link below, as well as some of the commitment Tweets that were posted.

If you're missing from our list, send an e-mail with all of the relevant details to: mdwyer@milesplit.com

I've decided to further my academic and athletic career at Oakland University and join the Golden Grizzlies!! pic.twitter.com/BuRigEqoez

@LaurenFulcher_ committed @UMichTrack this morning surrounded by some of her teammates. Proud of her for all that she's accomplished and excited for all that the future will bring her. #xcstatechamp #allstate #allamerican pic.twitter.com/1m9VqlDpqQ

It is an honor to announce my commitment to further my academic and athletic careers at the University of Michigan! I'd like to thank everyone for supporting me and helping me reach my goals. I'm beyond excited to join the maize and blue  #GoBlue pic.twitter.com/jLjyVbUXHW

So excited to announce I will be continuing my academic & athletic careers at Oakland University! Thank you to Coach Rice, Coach K & the OU athletes for making my college decision so easy! Go Grizzlies! @CoachKTrack @PaulRiceOU @OaklandTrackXC @GoldenGrizzlies @MileSplitMI pic.twitter.com/PLh51xubr8