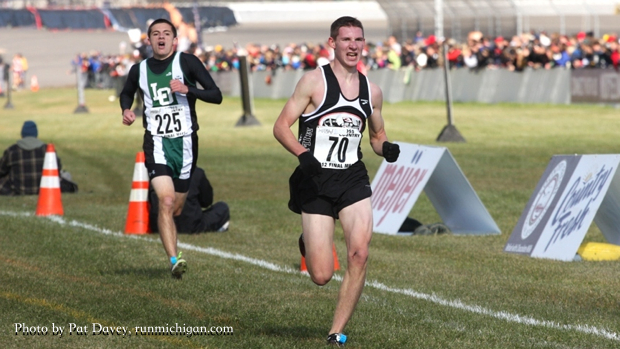 Highland-Milford’s boys cross country team is never far from the top.  As Coach Brian Salyers likes to point out, his squad has placed in the top ten in the MHSAA Lower Peninsula State Finals Division 1 race during 15 of the past 16 years.  In 2003-2004, they won back-to-back titles.

However, after they repeated again Saturday – making it four crowns in 10 years – you have to wonder if the Mavericks could make a much longer run this time.  They absolutely crushed the field at the Michigan International Speedway, scoring 83 points and winning by 84 over runner-up Waterford Mott’s 167.  Four of their fabulous top seven return next year.

Salyers likes to say his best team came in 2003, when his squad – led by Seth Thibodeau and Dan DeRusha – scored 90 and won by 59.  But Saturday’s squad, paced by victorious junior Brian Kettle’s 15:07.3, averaged a ridiculous 15:34.5.  Although team average records going back to 1980 (first year for 5,000-meter distance) are a little fuzzy and the conditions were clearly very fast Saturday, you could argue the Mavericks’ performance Saturday is second in D1 only to the Rockford Rams in 2000 – who were led by senior Dathan Ritzenhein’s epic 14:10 and had four the top 10.

“All seven of our guys PR’d today,” said Coach Salyers.  “People have asked me about comparisons to the 2003 team and I say, ‘I’m not going there.’  But this has definitely been one of those seasons.  We’ve really been on a roll.”

At the front, H-M has Kettle and senior Cody Snavely, who ran 15:16.7 for fourth.  Then 3-7 runners senior Chris Housel, senior Matt Graves, junior Kevin Black, junior Clinton Caddell, and junior Jeffery Field all ran between 15:46 and 16:05.

Salyers did not take his team to the early-season Spartan Invite showdown, but instead went to Culver, Indiana the following weekend.  “We got our hides tanned,” he said of a race where H-M was third behind eventual Ohio D1 state champ St. Xavier and Indiana state champ Carmel.  “We looked at our 65-second spread and said this is unacceptable.”  True, H-M’s spread Saturday was still 47 seconds, but the key was that Kettle and Snavely were killer up front and the 3-7 gap was just 19 seconds.

Individually, there were numerous contenders for the crown, including Kettle (2011 runner-up), Spartan champ Nathan Burnand of Waterford Mott, Portage champ Jeff Bajema of Grand Rapids Kenowa Hills, and Lake Orion’s TJ Carey, who was fourth last year.  Not surprisingly, no one really wanted to get after it and try to break away.  A huge pack went through the mile in 4:49 and six were within a second of each other at two miles (9:53).

“I took the lead just before two miles, but Brian caught up and pulled away,” said Carey.  “My kick is pretty good, but Brian is really fast.”

Kettle had actually tumbled to the earth at the mile, losing valuable ground and scraping his knees, but patiently made his way back to the leaders.