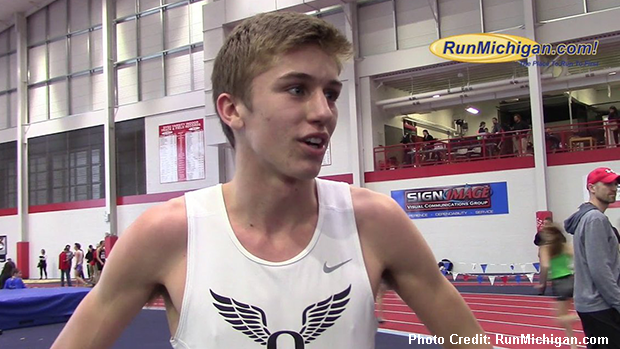 Alex Comerford competed at the NXNR Midwest and Foot Locker Midwest Regional in 2017.

Alex Comerford is a junior cross country and distance runner who holds impressive pr's of 4:21.30 (1 Mile indoor), 9:17.09 (3200m indoor) and 14:55.70 (5K XC).  The Otsego athlete was the runner-up at the 2017 D2 Cross Country Championship and he claimed the 3200m win at the MITS State Championship in February.  Comerford won the 3200m race at the Allegan Invitational this past weekend with his Michigan No. 1 time of 9:17.34.  This result also represents an Otsego school record, as well as a new outdoor pr.

MileSplit Michigan recently had an opportunity to speak with Alex about his season to this point and about what his track and cross country related goals are moving forward.

What track and cross country related accomplishments are you the most proud of?

Some of my key accomplishments are winning the indoor state 3200, placing second at the cross country state championship and finishing in second place as a team in 2015.

What goals do you have set for yourself for the 2018 outdoor season and beyond?

By the end of this season, I want to break nine minutes in the 3200 and win a state championship.  I plan on competing in North Carolina at New Balance Nationals Outdoor and I'm looking to vie for the national title. In the future, I would like to be an NCAA All-American and compete for Team USA.

Talk about the coaching that you receive at Otsego and also about some of your teammates who you regularly train with.

Coach Long, my high school cross country coach, has taught me so much about the physiology of running and the mental side of running.  He has set me up to do well in my races all throughout my high school career.  My teammates are always there to push me hard in practice and they're there for me outside of running, as well.  My sister, Mallory, who swims for Team USA and the University of Louisville has been someone for me to look up to and go to for advice.

Break down your recent 9:17.34 performance in the 3200 at the Allegan Invitational.

I was very happy with my recent race time of 9:17.  It was something that I have wanted to do for a while, as our school record has been around since the 1980's.  I feel like I still have a lot in me and there is a lot of room for improvement.  During my middle 4 laps, I lost focus a little bit due to being out front by myself, but I feel great about going into next week at the Golden Triangle meet.

My favorite work-out is at our summer camp in South Haven where we do 1000 meter repeats on a hilly, sandy cross country course with a lot of turns.  The course is all trail-based and in the woods which makes the training fun.  We do 8 to 10 of them late at night and you can see the steam coming off our bodies after finishing each rep!