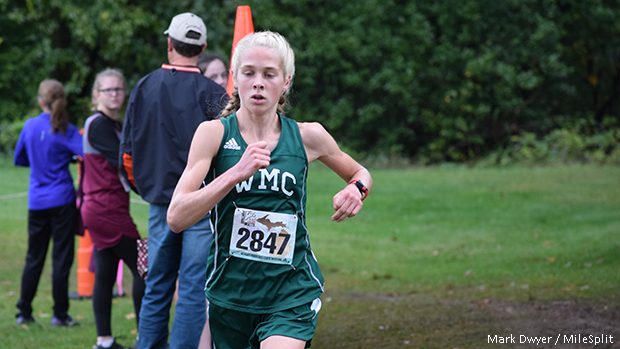 Abby VanderKooi shown during her victory at the Portage Invite earlier this season.

Pre-race individual favorites held up their end of the bargain at the MSHAA State Championships this past weekend at the Michigan International Speedway in Brooklyn.

Impressive performances were demonstrated throughout the meet by the athletes who, on paper, were expected to capture individual honors.

Continue reading about the winners from each classification.

Abby VanderKooi and Corey Gorgas both took dominant wins in the D4 contests.  VanderKooi, a freshman from Muskegon Western Michigan Christian, put a 1:15 gap on runner-up, Madison Volz of Lansing Christian as she posted a time of 17:47.30.  This marked her fourteenth victory of the season and her thirteenth time breaking 18 minutes.  She has also gone sub 17 minutes on a trio of occasions.

Saugatuck's Corey Gorgas was equally as impressive on the boys side.  The senior won by a 40 second margin and he put his stamp on who the best D4 runner in the state is; he's earned seven victories and a runner-up finish in his eight starts during the 2018 campaign.

Saugatuck gets the sweep at the #MHSAA LP XC D4 Boys Final, with the team title, and individual crown with winner Corey Gorgas in the day's first race. https://t.co/ooGInS3XJI