Team Michigan made their way to Kettering, Ohio this past weekend to line-up at the senior's only all-star meet known as the Mid-East Cross Country Championships.  This annual gathering features a collection of top athletes from Michigan, Ohio, Indiana and Illinois.  It became evident early on that the Michigan entry ventured out of state with a point to prove.  They left the muddy, hilly Indian Riffle Park course with both team titles in hand, as well as the individual championship on the ladies side.  Not to be outdone, the men's squad placed five runners in the overall top ten.

Madeline Rehm captured the race win with her 18:25.30 showing - this effort edged Buckeye State representative, Gracie Sprankle by five seconds.  Rehm's late season success continued; she was fourth at the D1 State Championship two weeks ago due to her pr clocking of 18:00.00.  Rehm was joined in the top 5 by teammates Noelle Adriaens and Victoria Heiligenthal. 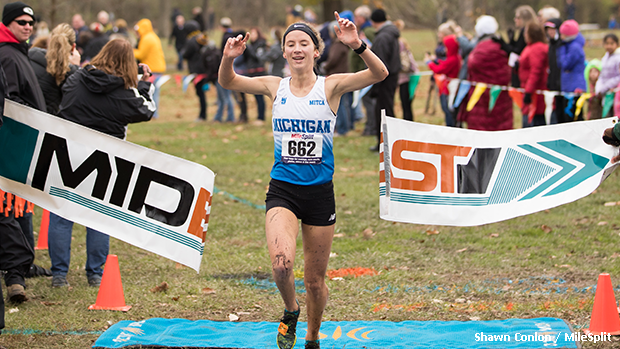 Sibling duo, Josh and Aden Smith along with Harrison Grzymkowski, Yami Albrecht and Evan White led the Michigan charge in the men's race.  The consensus afterward was that the course offered challenging terrain and slick footing, but each participant dealt with the same conditions and, while it wasn't conducive to producing fast times, everyone in the field had a fair shot at success.  The Belmont University bound Grzymkowski and Albrecht, who recently committed to Oakland University, both indicated that the Mid-East Champs provided an excellent opportunity for a hard tempo run in advance of this weekend's Foot Locker Midwest Regional in Kenosha, Wisconsin.

MileSplit had an opportunity to speak with Division 3 State Champion, Yami Albrecht post-race: